In a previous blog we’ve looked at how real site conditions affect the laboratory tested values of acoustic performance for office partitions. We also discussed how these numerical values relate to subjective criteria for speech privacy (Speech privacy potential – SPP), what helps and what hinders SPP.

Now all this stuff would be really easy even on site if partitions were uniform, monolithic structures, but the reality is they’re not. One simple factor is that people have to get in and out of a room.  Are we allowed to call them rooms now? – When I was an architectural student “room” was a naughty word. I suppose in our business we do refer to meeting rooms and offices so let’s stick to those terms rather than getting into a discussion on office semantics.

Anyway, entering any office space, meeting room or individual office will mean having a door of some sort – so what happens to the acoustic performance to an office partition when you stick a door in it?

In general most 3 layer particle board solid core door blanks would test to around Rw 40dB. Not bad you’ll think. However, this is for the door blank only, tested fully sealed all round and without operating in any sort of frame – so pretty meaningless really. The fact is that one of the Rw 40dB door blanks when you put it in an unsealed frame will probably get you a test level around Rw 22dB. A sobering thought!

So what happens when you build this into an office front?

Let’s take a typical office front 3m wide x 2.7m high as the sketch below. We’ll specify a single glazed partition for the office front in 12.8mm acoustic laminate glass with an Rw 38dB and an unsealed full height doorset 1000 x 2700mm with an Rw 22dB as above. 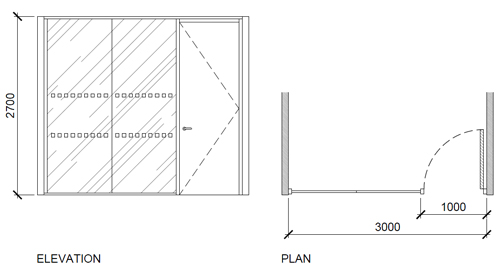 Norsound (who have an interest in these things because they happen to make acoustic door seals) have been kind enough to provide us with a free to use acoustic calculator on the internet www.acousticcalculator.com If we plug in the figures from above – wall dims 3.0 x 2.7m, doorset dim 1000 x 2700mm with Rw 38dB and 22dB respectively the calculator gives us an acoustic performance for the overall office front of Rw 26dB.

An SPP of 63 would be classed as poor and would mean that normal speech can be most of the time. That’s really going to mean that if you have a manager that talks loudly on the phone he’s always going to be heard outside his office!

Well, we should be able to improve this by increasing the performance of the glazed partition? Let’s see what happens if we increase the specification of to a high grade double glazed front comprising 1 layer 12mm toughened glass and 1 layer 12.8mm acoustic laminate with an Rw 45dB. If we now just change the figure for the wall element to Rw 45dB we should see an improvement in the overall performance right?

The increased cost of double glazing the front is going to be around £400 – £500 per linear metre or £800 – £1,000 for each office. That means you’ve just spent a chunk of the client’s money but the SPP is the same and you’ll still be able to hear that loud bloke on the phone!

So what’s really going on?

Sound is always going to find the path of least resistance. In a previous blog we looked at how it is important to seal up gaps around partitions, ducts, grilles, sockets etc to prevent indirect or flanking transmission. Well a door is no different. Without a seal around the outside the sound is just going to leak around the door and undo any benefits you might have gained from specifying a double glazed or uprated acoustic partition for the other part of the office front.

Another UK seal manufacturer is Lorient. As well as fire and smoke seals they make a range of acoustic doors seals, but more interestingly in this context they have an acoustic camera which shows how sound travels through, or rather around, a door. You can see what’s happening.

Now in reality I think most of us would specify or expect some sort of frame seal around a door in a system partition frame, but what about between the bottom of the doors and the floor? At Vosseler UK we always size our doors to allow a 7mm gap for clearance. And from what we now know a lot of sound is just going to pass straight under the door.

This next animation demonstrates this courtesy of Lorient’s acoustic camera.

Obviously what we need to find is a way of sealing this gap. You could use a permanent wiping type seal but this is just going to bind on the carpet when you try and open the door.

The best option is an automatic drop down seal or drop down threshold. The simple idea behind this is that by closing the door into the frame a switch on the end of the threshold allows it to drop down and close up the gap. When the door is opened the switch is released and a spring draws the threshold up into the door so it doesn’t bind on the carpet. The animation below illustrates this.  All in all it’s a bit like your fridge light.

You can now see the effect of the drop threshold again courtesy of our friends at Lorient.

Both Norsound and Lorient make different types of frame and automatic threshold seals, and have test results for their use on various types of doors and door blanks. You can look up the results for the door type or manufacturers blank you’re considering but to summarise these a 44 – 45mm solid door with a perimeter frame and an automatic drop threshold achieves an Rw of 31 – 33dB. A lot better than the Rw 22dB for an unsealed doorset.

We can then use the Norsound calculator again to see what impact this sealed doorset while have in both of the scenarios we outlined.

Again, an office from 3m long a 2.7m high, single glazed with an Rw 38dB only this time we use a doorset with frame seals and an automatic drop threshold which gets a test of Rw 33dB and enter these figures in the calculator we get a performance for the overall wall of 35dB. A lot better than the Rw 26dB we got for the overall using an unsealed doorset.

If now we increase the specification for office front to a double glazed system with an Rw 45 dB and we enter the same figures, we now get a performance of Rw 37dB for the overall office partitioning front.

So in this instance because we have specified acoustic seals to the doorset we do now get some benefit by uprating the rest of the office front.

You can look up some test results for other types of door blanks – say 54 or 60mm enter them in the calculator and see the effect of the overall office or meeting room front. That way you can use the information to decide the best combination of partition and door spec combined rather than trying to look at elements in isolation.

Summary and other results

Let’s look at the results we found in various scenarios. I’ve also added in the effects of increasing the door thickness to 54mm in some instances

So how do we apply all this?

Well, we’ve seen that an unsealed doorset can negate any increased performance of an office or meeting room front associated with increasing the specification of the adjacent or surrounding partitions. You need to consider the performance of the overall assembly so that you are not wasting the client’s money on inappropriate specification of single elements.

It really seems that without frame seals and automatic drop thresholds on doors there is no benefit to using double glazed partitions on small individual office fronts.

On longer runs of partitions such as you might get on a large meeting room front as opposed to an office the an increased partition specification does provide for degrees of overall increased performance.

As long as we specify acoustic seals on doorsets you can see that increasing the specification of the partition will then provide some benefits. However, you need to decide whether the increased performance justifies the increase in costs, which as we saw could be £400 – £500 per linear metre.

1 www.norsound.co.uk
2 Take care – the calculator requires you to end the wall dimensions in metres and the door dimensions in millimetres.
3 www.lorientuk.com